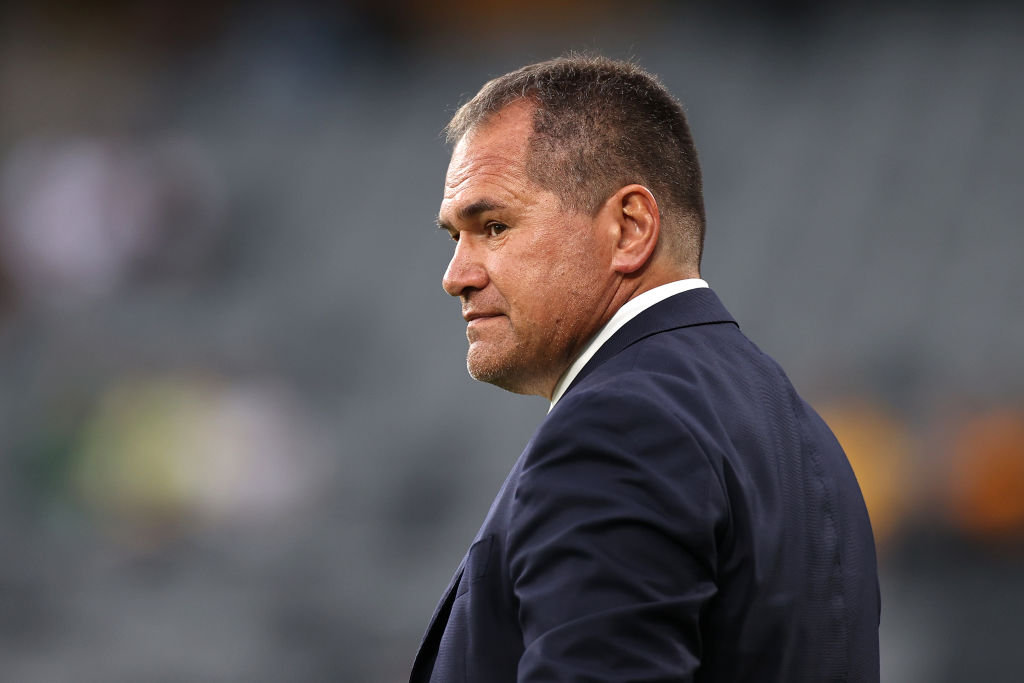 👀 | Dave Rennie has dropped a series of bombs in his 40-man Wallabies training squad, leaving out two of his regular hookers and selecting a number of bolters: https://t.co/b5cMhYelFP pic.twitter.com/xfMHfm3AJj

It’s a rare enough thing for an international rugby union side to draw more than one game in the course of a calendar year, but the first year of the Dave Rennie era in charge of Australia included three.

After holding New Zealand, the country of the current Wallabies head coach’s birth, in his opening Test and first of the four 2020 Bledisloe Cup matches, consecutive defeats in Auckland and Sydney put a new-look side on the back foot. Rennie hasn’t been shy about making changes to the squad from predecessor Michael Cheika either.

Performances by Australia during his first 12 months and six games in the job have been mixed. Rugby is a results business at this elite level, and the fact is the Wallabies have one win under Rennie to date.

That came by a narrow two-point margin over the All Blacks in Brisbane and was their only victory in the Tri-Nations Series with Argentina. Discipline under Rennie hasn’t been particularly good either. Australia’s penalty count from the early part of his reign averages out at 10.5 conceded per match. There have been three players consigned to the sin bin in three of the last four games, and early baths because of red cards in two of their last three.

In other words, the Wallabies haven’t been able to keep their full XV on the field. Each sending off and 10 minutes out of action has made the task for the many new faces brought in by Rennie that bit more difficult.

Even Australia captain and breakdown master Michael Hooper had to spend 10 minutes in the bin in the most recent draw with Argentina. The flanker, so flustered in the first half, atoned for his poor discipline with a try in the final quarter which, when converted, ensured consecutive stalemates with the Pumas.

Besides skipper Hooper, other senior players Rennie has kept in the fold include props Scott Sio and James Slipper, lock Rob Simmons, and backs quartet Dane Haylett-Petty, Reece Hodge, James O’Connor and Marika Korobiete. The latter was another to go into the bin, albeit with no lasting damage in that victory against New Zealand.

Red cards went to relatively inexperienced forwards Lachlan Swinton and Lukhan Salakaia-Loto. They must learn from the incidents that led to their respective dismissals against the All Blacks and Argentina.

Rennie’s team clearly have plenty to work on ahead of welcoming 2023 Rugby World Cup hosts France for a three-Test series Down Under this July. Speaking of that tournament, the current rugby union betting with bet365 has Australia as 13.00 chances for the global crown.

That is a reflection of where the Wallabies are under their Kiwi boss right now. While the French once again didn’t win the Six Nations Championship, coming up well short of what was needed from their belated final fixture at home to Scotland, there are some promising signs about Les Bleus for the future.

Their Tour of Australia will be key for Rennie, who has named many uncapped players in his training squad, as has opposition head coach Fabien Galthie. Seven tries from his first six games in charge is another area of improvement earmarked ahead of France’s visit and the home Test against Japan in August.