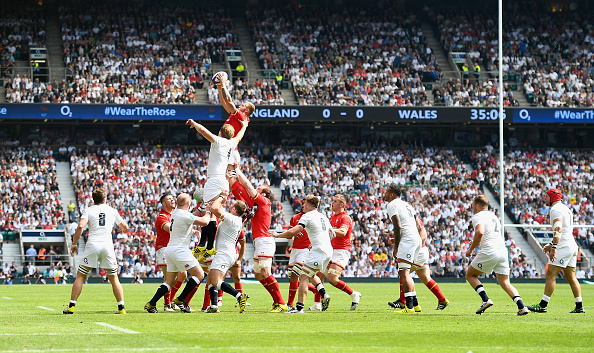 England recorded a comfortable 27-13 win against Wales in their pre-tour warm up game at Twickenham. But can they challenge the Wallabies next month?

There are few bigger rivalries in sport than England and Wales. Labelling this fixture a friendly was somewhat misleading, with tickets to the Antipodes on the line for several players on both sides, the term 'friendly' could not be further from reality.

England had a numbers of key players missing from action due to Saturday's Premiership Final and with both teams having little preparation time before the game it was a shaky start.

Wales crossed first, with a break up the pitch resulting in a simple walk over try for prop Evans just left of the posts.

England, lacking shape in the midfield early on, took their time in responding but eventually did so through Luther Burrell, who crashed over from short range.

Anthony Watson then scored shortly after, in typical Watson fashion; with devastating pace and sublime footwork as he found the try line with a brilliant, seemingly impossible over the head finish to touch down for England's second.

With George Food unable to find the posts and Wales turning down three attempts for goal, Wales took a three point point lead into half time for the first time at Twickenham in over 30 years.

Youngs scored a sniping try shortly after the break, a trait that he and his colleague Danny Care have made their own in recent years.

Shortly later, debutant Jack Clifford went screaming half the length of the pitch - after a dubious knock on from Dan Cole, over looked by the TMO - out running the Welsh centre to score under the posts leaving Ford an unmissable kick - only his successful attempt of the game.

With the unfavored Chris Ashton not in the squad and Jack Nowell on Premiership duties, England's Yarde was one of many vying for a place in the squad to face the Wallabies and he delivered with gusto. A powerful performance was capped off with a deserved try in the corner after England lock Lawes, back in fine form, brushed aside Wales' Jamie Roberts and delivered a perfectly weighted pass for Yarde to run on to and take over the white wash.

Ford yet again missed his target and England finished the game with a comfortable lead. Keeping the Welsh scoreless in the second half against a back line consisting of a numbers of players who were part of the winning British Lions tour of Australia just three years ago will certainly have pleased English Coach Eddie Jones.

So who took their opportunity to impress?

Jones has been very clear in his desire for England to return to their roots and produce the most dominant pack in the world. The England scrum has been on the decline in recent years and was an area that the Australian's comfortably exploited to knock the English out of the World Cup last year. However, against the Welsh, England was able to negate a notoriously strong Welsh scrum and even bully them into conceding penalties in the final quarter, and this dominance was also seen with a faultless lineout performance from Dylan Hartley and co.

Kruis and Itoje established themselves as Jones’ first choice second row pairing in England's Six Nations Grand Slam campaign, however, the weekend saw a return to the previous pairing of Launchbury and Lawes and both were back at near best with Launchbury awarded Man of the Match for his efforts. This position is one of Jones’ biggest selection dilemmas now but not one that will trouble him in the slightest with so many in form players to pick from.

Another who took his opportunity was Jack Clifford of Harlequins, making his first start in an England shirt. It may not be enough to put him in front three-time Six Nations Man of the Match, Billy Vunipola at no.8, but with Clifford able to play several positions, he has certainly booked his ticket on the plane to Australia.

Other players of note were Yarde and Mullan, who both looked very comfortable in the England set up and Daly and Devoto who both showed great pace and flare from the bench in the final 10.

The likes of Mike Brown, James Haskell and Ben Youngs – despite his excellent try scoring break - all looked off their usual tempo and were over shadowed by the newer names in the team. But of biggest concern was George Ford’s kicking display, leaving many questioning Danny Cipriani’s omission from the squad for this tour.

Neither team put in a performance that will worry the finalists of last year's Rugby World Cup. However, England’s strength and depth certainly shone through, and there are seemingly signs that England, under Eddie Jones, are developing the self-belief that has been lacking from the national team since the Woodward era.

Can England win in Australia next month?

Belief in this England squad is certainly on the rise for fans and players alike. Six months ago, heads hung in shame after England’s early dismissal from the World Cup on home turf at the hands of Michael Cheika’s team but can this team, with a new lease of life, right the wrongs and secure a series win in Australia? It is certainly shaping up to be a great series between the two, a real challenge for both teams and a true spectacle for rugby fans near and far.

The three Test series between Australia and England kicks off in Brisbane on Saturday June 11 with tests in Melbourne and Sydney over the following two weekends.