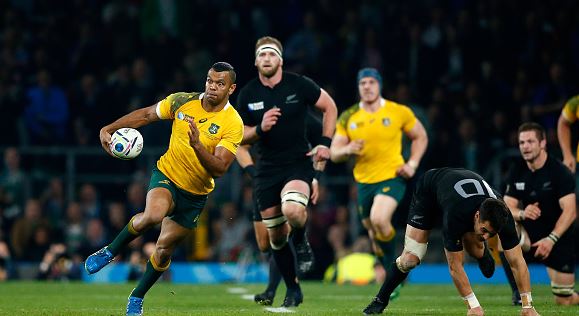 Now that The World Cup is finally at a close, with New Zealand the first nation to take home three William Webb Ellis trophies, we can start to reflect on a fantastic tournament.

Though they looked beatable all year, the All Blacks showed us why they are one of the most dominant teams not only in rugby, but also in sport as a whole, winning their second World Cup in a row.

They had their wobbles in the semi-final, and even in the second half of the Final, but this champion team held it together to become the first nation to win back-to-back World Cups.

In the end, when the match was on the line, the experience and composure of the All Blacks' squad was too much for the Australians to handle, none of whom had played in a World Cup Final before.

To the team that nearly beat the mighty All Blacks in the Final, nothing less than a 9.5 is deserved.

Australia did almost everything right this tournament, but injuries and a lack of experience cost them in the final, and there is certainly no shame in finishing where they did.

The youth of their side means that most of them will very likely be back for 2019, and ready to go one step further.

South Africa were just three points away from defeating New Zealand and playing off against Australia in the final, but in the end were just another nation that fell victim to the experience of the Kiwis.

A big-time wobble against Japan to start the tournament did not end up hurting the Springboks, who ended up topping the pool and toughing out a victory against Wales to make the semi.

They have some great young talent including Lood de Jager and Handre Pollard, so expect them to also look to go to the next level in Japan in 2019.

Wales would be very disappointed with their last-minute loss to South Africa in the quarter finals, but to get as close as they did, and to make it out of the pool of death for starters is a hell of an achievement.

What’s more, the state of the team, in particular the injury toll, speaks volumes to the culture of belief Warren Gatland has built in the Welsh camp, as well as the depth of Welsh rugby.

One wonders just how far they may have gone if they had been able to stay fit.

At the outset of the tournament, everyone expected Argentina to be a threat, but not many expected them to make it as far as they did.

Los Pumas showed how far four years in The Rugby Championship with New Zealand, Australia and South Africa has taken them, when they defeated a depleted Ireland side 43-20 in the quarter finals.

For making it as far as they did, and catapulting themselves all the way up to fourth in the World Rugby Rankings, Argentina get a well deserved 9/10 for their efforts in the World Cup.