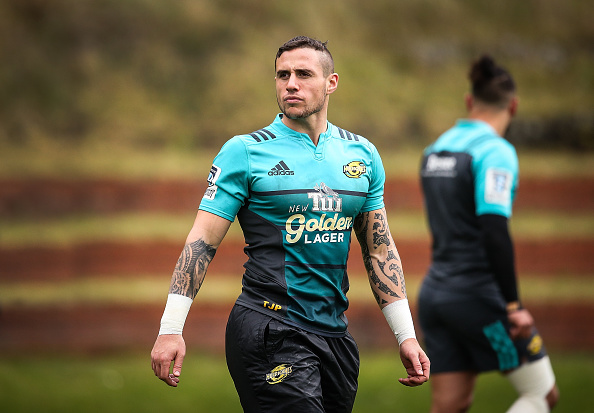 The Hurricanes have breathed a massive sigh of relief after learning that stand-in skipper TJ Perenara won't be handed any retrospective punishment for appearing to kick Chiefs captain Sam Cane during the Kiwis 25-9 victory in Wellington. Perenara wasn't cited despite lashing out at Cane and making contact with the All Blacks forward's head just before the hour match in the Super Rugby semi-final. While the flanker clearly felt the impact of the kick, the Hurricanes man will still be able to line up with his team-mates in the upcoming Super Rugby final against the Lions.

The news will be a real boost to the New Zealanders' morale heading into the final. Perenara has been one of the club's star players this season, and the incident could have resulted in a ban of between two and 12 weeks. It was clear from the replays that the scrum half lashed out at Cane after being tackled without the ball. One factor that may have helped his cause was the immediate concern for his opponents welfare, which was also evident to see from the television cameras. Either way, the Hurricanes are a much stronger team with Perenara in it, and the New Zealanders are now in with a great chance of winning their first Super Rugby title.

Currently boasting odds of 4/11 to beat the Lions, the Hurricanes know they won't have a better chance of ending their wait for silverware than they do now, but that's not to say Chris Boyd will let his team start counting their chickens just yet. One thing is for sure, though, the club will be feeling a lot more confident about things now they know they're going to have their influential scrum half in the starting line-up.

The past couple of seasons have really shown just how much of a talent Perenara is. As well as cementing himself in this Hurricanes team, the youngster has also broken into the New Zealand team, involved in the All Blacks successful 2015 World Cup campaign. A virtual ever-present this season, Perenara has been at the heart of most of what the Hurricanes have done this year, scoring seven tries and creating a lot more. Now 24, the scrum half will be looking to push on and cement himself as a starter in the All Blacks team, something which would be helped by being part of a championship winning team.

For the Hurricanes, beating the Lions and securing the title would be one of the best achievements by a Super Rugby team in recent history. Without the star names of some teams in the league, the New Zealanders have put themselves on the brink due to a solid team spirit and a talent for stepping up for the big occasions. The Lions might be a tough prospect and a team more than capable of beating the Hurricanes, but based on this season's showing, not to mention the fact three of the last four titles have been won by teams from New Zealand, we could be about to see history made this year.