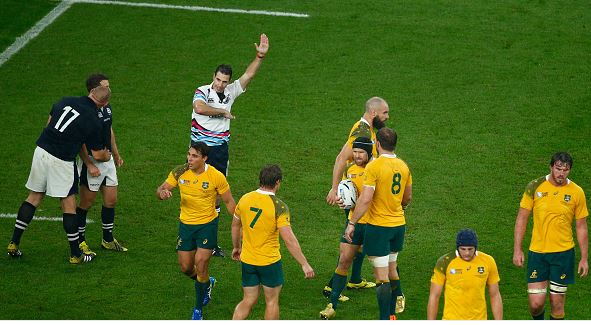 World Rugby have released a statement saying South African official Craig Joubert was wrong to award Australia a penalty in the final minutes of their quarter-final against Scotland.

Joubert copped intense heat in the British media​ ​after his call to penalise the Scots for being off-side in the 78th minute, after which Bernard Foley kicked a goal to give the Wallabies a one-point victory.

The South African ruled despite reserve Wallabies halfback Nick Phipps touching the ball last from a Scot knock-on, he had not intentionally played at it, and thus Scottish prop Jon Welsh was off-side when he caught the ball in front.

But in the first statement of it’s kind at the 2015 World Cup, the World Rugby match official selection committee​ ​issued a clarification of the decision.

“On review of all available angles, it is clear that after the knock-on, the ball was touched by Australia’s Nick Phipps and Law 11.3(c) states that a player can be put on-side by an opponent who intentionally plays the ball,” the statement said.

“It is important to clarify that, under the protocols, the referee could not refer to the television match official in this case and therefore had to rely on what he saw in real time. In this case, Law 11.3(c) should have been applied, putting Welsh onside. The appropriate decision, therefore, should have been a scrum to Australia for the original knock-on.”