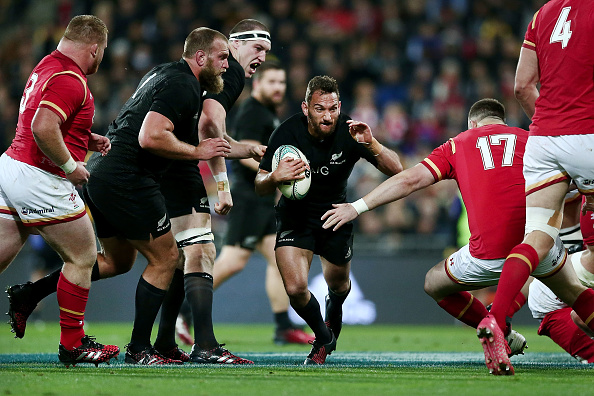 It was all going so well for Aaron Cruden in 2016. Between his Waikato Chiefs sitting atop the New Zealand conference and a man of the match return to test rugby after a long injury layoff, life was peachy for the talented five eighth.

Unfortunately for Cruden, he swiftly learned that all it takes to derail what appeared to be his first Rugby Championship as first choice fly half for his country was one and a half missed tests through a non-serious injury.

When the Waikato first five eighth went down in the 32nd minute of the second test with a neck injury, young Wellington Hurricanes prodigy Beauden Barrett was handed the number 10 jersey, and what followed was 128 near faultless minutes of rugby at first receiver.

Barrett’s break out series for the Kiwis all but confirms what many thought beforehand – that it is the 25 year old who is the long-term successor to Dan Carter’s All Blacks jersey.

Steve Hansen will clearly have some thinking to do before The Rugby Championship. Does he start the man who is technically the “incumbent”, Aaron Cruden, for all his fitness worries? Is he even the right choice?

He did seem to reach his outstanding best in the first test. Defensively sound. Good punting. Good passing game, including nice offloading skills for such a small statured man, let alone a stand off.

Although both Barrett and Cruden’s resumes read the same amount of test caps, Cruden’s features 25 starts and Barrett’s only 7. Against the best nations in the world, 20 caps of experience is an incredible gulf that cannot be made up with skill or form.

The older man is also the more traditional five eighth. Cruden’s perfect passing game suits his All Black backline to a tee. He rarely makes the wrong decision out of pass, run or kick, and if you’re open, he’ll get you into space with the footy in your hands.

However, Beauden Barrett’s current form is irresistible. He has the better running game. He’s more versatile – he can fall back to fullback or even the wing if necessary.

This has at times worked against Barrett and kept him on the bench and has restricted him to just the 7 starts in his test career.

He is also the better of the two off the tee right now, at both Super Rugby and test level. The superb importance of this cannot be overstated at all (see Farrell, Owen).

While Barrett used his blinding pace to his advantage against an increasingly tiring Welsh defensive line, it is arguably this feature of his game that is holding him back from realising his true potential as one of the great international five eighths.

Due to his pace, Wales’ defensive line was happy to let him come to them, which evidently made it easier for New Zealand to get around them.

Too often does this lead to long stretches of phases where Barrett will be happy to push the ball on in the line and go through the motions.

It is in this neutral phase play where the pro-active (and far less patient) Aaron Cruden, as the more complete five eighth of the two, will be happy to step out of the offensive line for a few phases and wait for an offload to create a second phase play and a try scoring opportunity.

This is less of a blight on Barrett and more of a recognition of Cruden’s superior game vision at a position he has played his entire life.

Chop the fish up any way you want, Cruden is the most complete player of the two, and likely the world’s best at his position, bar the man who just retired from the black number 10 jersey.

There is only one way Barrett will learn the position better, and that is through copious studying, training, and of course international exposure at five eighth.

The latter will obviously mean less time for Cruden in an All Black kit, which is where Steve Hansen will have to make a decision on the future of the two.

One suggestion I have mooted is a positional shift for Barrett – I have previously suggested deploying him in the line at second receiver, or inside centre.

Here he can abuse outside channels with his pace, and slowly learn playmaking at a test level, in the third most important playmaking role on the field, with New Zealand getting 160 minutes of contribution from both Cruden and Barrett.

It’s a laughably outrageous problem to have – less so for the rest of the world than the All Blacks – but one they will have to solve nonetheless.