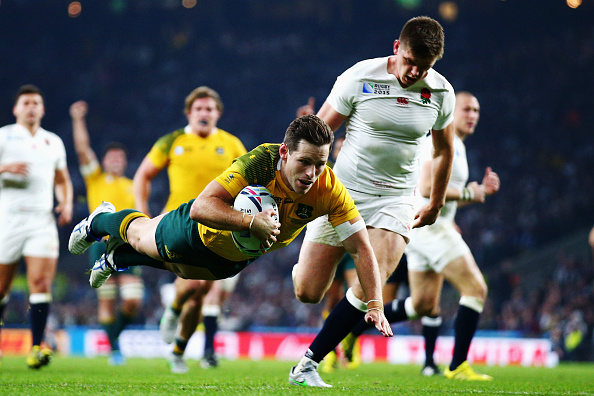 With the teams named for the first of three tests between the Wallabies and England this weekend, and so much hype from either side, we take a look at some of the key battles that could be deciding factors in this weekend's fixture.

The unexpected and game defining factor from last year’s fixture was Australia’s dominance upfront against an experienced English front row – an area that is historically in England’s favour was very much owned by Australia’s pack that day.

Prior to the World Cup, Cheika drafted in 84 cap Argentinian scrummaging legend Mario Ledesma as scrum coach for the pack, and what a job he has done.

Both teams understand the impact this area will have on the game's balance and will be pushing hard for dominance from the first meeting of heads, but tactical changes by the coaches will play a vital part in this exchange as the momentum of the first half - whichever way this may fall - could entirely shift in the second.

Will we see England’s strength in depth prevail as it did against a proven Welsh pack last month or will the experience of the Wallabies bench (boasting a cool 200 caps between them) prove, yet again, to be too much for England’s fresh faces?

"Pooper" – the talking point of last year’s World Cup, a devastating combination of arguably two of the best back rows in International Rugby at the moment. Both players, deservedly, made the short list for International Player Of The Year last year and when combined with Scott Fardy, or even Sean McMahn from the bench, this is world class back row that should be feared.

Maro Itoje - a name scarcely known in Australia but one that has been followed by terms such as “mark my words” and “watch this space” in English clubs and pubs for over 12 months now. Itoje has followed his U20 World Cup Victory (as captain) with an English Premiership & European double this season with Saracens, a Grand Slam for England and was named European Player of the Year at just 21 – this guy means business.

Despite playing in the second row, Itoje grew up playing in the back row and certainly looks like a 7 around the pitch; add this to the back row of Haskell, Robshaw and Vunipola that excelled in the Six Nations this might just be the 4way combo to nullify the Pooper machine.

Whether it be crucial or crunching tackles, securing turn over ball or disrupting opposition play Pocock, Hooper and Itoje are all capable of changing the momentum of a game in an instance and will do just this on Saturday.

With raw pace to burn and feet that move “faster than a rat up a drain pipe” (thanks Honey Badger!), these two have been in fine form with their respective clubs Bath Rugby & Western Force for a while now. Debutant Haylett-Petty will be looking to make his mark at an international level however Watson has made the 14 shirt his own with his incredible ability to find the white wash of the try line in even the most difficult of situations with 12 tries in just 21 appearances, including England’s only try against Australia in the World Cup.
Expect speed, steps and excitement from these two.

Both masters under the high ball and  able to punish any kick veering from pin point accuracy with a slicing return back through the opposition.

These two have unmemorable days but just one moment of magic from either of them is capable of re igniting their team instantaneously.

If picking for a World XV Folau would get the edge over Brown when both are on form – the question is, who will turn it on for Saturday?

Long-time friends these, two were team mates at Sydney Rugby Club Randwick over 30 years ago and so if ever there were two coaches who knew how to play the other, these would be them.
Cheika this week has refused to be drawn into a war of words and has instead showered Jones and his team with compliments, a stark contrast to the fearless sledging machine Eddie Jones knew as a player all those years ago at Randwick.

On the reverse, Eddie Jones sent a warning to his players saying  "Everything that's done around the game is going to be coordinated, all coordinated to help Australia win," after being greeted into Australia with a routine bag search at the airport. He then followed this up by naming the Australian match day 15 on behalf of Michael Cheika on Monday.

These two know how to play the game on and off the field and so this personal battle between the two will be fascinating watch unfold over the next three and a half weeks.

Australia, under Cheika reached the World Cup Final just eight months ago, uncompromisingly dumping Stuart Lancaster’s England out of the competition in the group stage however have not played a game together since October last year.

In the same time frame Jones has rebuilt a deflated England team into game winners with an unbeaten record of 6 from six in his sic month tenure. England won their first Grand Slam since 2003 in the Six Nations earlier this year however are yet to play a top tier nation under this new regime.

This Brisbane Test could go a long way to deciding the overall winner of the series and with the heat and humidity being uncharted territory for a large majority of the England team the smart money would be on Australia recording the first win of the series however the romantic optimist would find it hard not to pine for England to continue their return to former glory – and let’s be honest, it would be great for rugby, not to mention long over-due, to have a Northern Hemisphere team capable of challenging the Southern Hemisphere teams again.

Farrell out of Six Nations with ankle injury