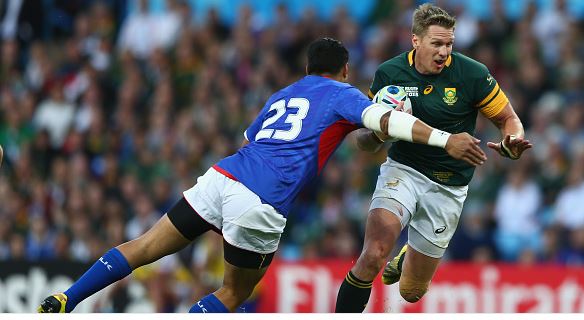 Conrad Smith, along with his centre partner Ma’a Nonu, will go down as one of the greatest centres of all time. Therefore, replacing him should be as tough a job as they come.

Not for New Zealand.

In typical All Blacks fashion, they already have a younger version of Ma'a Nonu ready to take his place, much like a succession plan. His name is Malakai Fekitoa.

Fekitoa is already an elite runner and passer, perhaps not to the level of Smith yet, but you can imagine that one day he may get there.

Whilst he can put a big hit on if you’re not careful, his defence as a whole does need to improve, but with the gears he’s gone through over the past few years, it’s hard to imagine him not going to the next one.

Once again, legendary South African lock Victor Matfield is retiring. One of the great second rowers of his generation will take some replacing, but the Springboks have never been short on talls.

Last year, there could have been a good conversation about who should take Matfield’s spot when he vacates it. But this year, Lood de Jager has shaped as the man to partner Eben Etzebeth in the second row for next year and beyond.

The six-foot-nine, 125 kg behemoth is even bigger than his monstrous lock partner, and showed spectacular form through both The Rugby Championship and The World Cup.

Similarly, post 2015, a number of men could’ve been in the running to replace South African captain Jean de Villiers in the #12 jersey.

Fast-forward to the end of the season, and the Springboks are not thinking about anyone other than Damian de Allende.

Coming in at six-two and 101 kg - huge for a centre/wing - de Allende has spent the past two seasons with Western Province and the Stormers running over the top of people, as he has continued to do in his 10 games for SA.

He is also incredibly mobile for a man of his size, he will need to work on his passing and offloading, so that his outside backs can play off the space he creates in defensive lines with his running game.

Freddy’s versatility and creativity will be hard to replace in the French lineup, but if creativity is what Les Bleus are looking for, then they should look no further than Francois Trinh-Duc.

Overlooked for the 2015 World Cup, the 28 year-old has 49 international caps to his name, and his incredible vision and versatility are great qualities for a fly-half.

Other names France may look to are Morgan Parra, Remi Tales and Camille Lopez, but due to his experience and creativity, Trinh-Duc is undoubtedly the man for the job.

Judging by the experimental lineups the French have employed lately, they are still looking for the best man to replace former captain Pascal Pape.

Experience is a great quality in an international setup, especially in the forward pack, and for this reason, Alexandre Flanquart should be the man to join Yoann Maestri in the second row.

As mentioned earlier, the other front-runners for the starting job include Yannick Nyanga and Bernard le Roux.

However, both men are utilities, and are more suited to a bench role, meaning Flanquart is the obvious choice for starter.

Fortunately for the Irish, they have one of the most talented young locks in world rugby in waiting – Iain Henderson.

Henderson made his professional and national debut in 2012, and has won 20 caps since. He is also able to play in the back row, making him even more valuable.

Man of the match in Ireland’s match against Italy in the World Cup, Henderson is one to watch in next year’s Six Nations.